(A brief quote from Encyclopedia Brittanica):

The northern boundary of Middle America is rather vague, lying somewhere in the central Mexican state of Jalisco, where the Indians are largely acculturated to Mexican society. The area from Jalisco to the Panama Canal displays a bewildering network of native musical styles in mountain and jungle, hybrid and modern music, and rural and urban styles. It would be convenient to assign the flute and drum music to native rites and the stringed music to Spanish fiestas, but there are exceptions. ... stringed instruments appear in Carnival and Lenten festivals, ... and in the fiddle accompaniments for the arrieros ("mule-drivers") dance. ... contiguous tribal groups manifest contrasting styles.... Though it would be a vast simplification, it is not impossible to set off the native musical styles retained in mountains, jungles, deserts, and generally in rural settlements as distinctly different from the music encountered at urban political fiestas and tourist attractions.

The Fiesta of la Virgen de Guadalupe, on December 12, is the most important festival in Mexican tradition. In Independence, Oregon, people from Jalisco and Zacatecas who now live in Independence gather to perform the ancient ritual dances, with fiddle and guitar. Everyone in the community is welcome to participate/watch, and there is a delicious meal prepared as well. Hundreds of people attend.

The local group lost their fiddle player, and I was recruited to help with the music. I learned from copies of tapes made on hand-held cassette recorders at dances in Mexico with much help from Pablo Orozco, rhythm guitar. [Pablo also plays excellent Nortenyo style accordian in other venues]. The two of us do all the string music, with ample rhythm from the rattles, bells and feet of the dancers.

There are two rows of mostly men and a few young women dressed the same, and sometimes a few kids at the end of the line. There are usually 20 to 28 people in the dance, plus the clowns. In addition, a group of children ages 8-15 have been working out the dances on their own; a living tradition. In the last few years a group of mainly teenagers have been doing them in Corvallis, and Pablo and I provide the music.

The attire is Festival Indian: shiny headpieces trailing long ribbons, white shirts, a red apron with rows of decorations and bony tassels that rattle against each other; in the right hand a rattle and in the left hand a small bow. The bow is about 18" long, strung with rubber tubing and with an arrow in place so that when the arrow is pulled back and released there is a clack! sound of wood on wood. Under the costume everyone wears a white shirt, blue jeans, and choice of shoes, often nice cowboy boots. 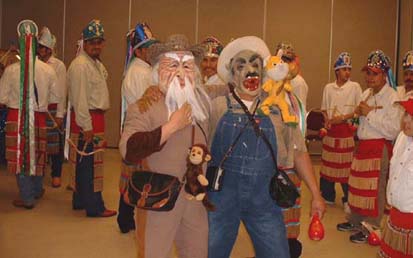 Each dance has a tune, and the dancers refer to the tune either by the name of the step or of a particular pattern of the dance; thus we have Portalitos for the little-windows dance, or La Son de los Pasos for one with an especially active step, etc. Each dance has foot-work or shuffles specific to the tune. Individual dances will last about 10-15 minutes; most are very active physically.

In Portalitos, the windows, the main figure is something like a combination of duck-and-dive the length of the hall, and knit two perl one in weaving. Men in opposite lines hold on to their partner's bow, making a pair: the head pair faces down the line, while the others face up: The 1st couple ducks under the second, but then backs up to go over the second while facing the same way, then re-ducks under them again, before going to the second pair, where they duck and dive and re-duck again; proceed to the third in the same manner; when they begin to duck under the fourth pair, the second pair follows them ducking and backing and re-ducking under the third pair, until everyone is ducking under or back-passing over, retreating over or under and repeating, to the far end; followed by a turn as a pair and repeat in the opposite direction until the head pair is back in place, and the knit-and-perl gradually subsides until the last two have backed through the next-to-last for the last time. And a few more figures.... I could not teach the figure at any of the square dances I call: too complicated!

And while they dance through the patterns, one or two clowns dance in, out, through and around the lines of the dancers, both dancing with and mocking them. The clowns have worn different outfits for most of the thirty-some performances I have been in on. Once one had a cowboy outfit and a Nixon mask, while the other wore a black robe, a large cross and a blonde wig and a mask (that happened only once). Once they had cap guns in holsters, with gunfights through the rows of dancers. One year, after a visit from a pushy news photographer the day before, they brought camera kits in waist bags and took photos of everyone, assuming whatever posture was necessary for a good angle including lying down in the middle of the dance and looking up. They had done hours of preparation also, cutting many portrait photos from magazines, pasting them on cards and storing them in the waist bags; they would take a fake photo of someone in the audience, then wave a 3x4" card until it appeared dry, and give the phony photo to the subject. A "photo" of Pablo the guitarist showed a rock star with guitar, same color hair, same color shirt. Very handsome. Lately a monkey suit has been popular, also a large clown in wig and purple bathrobe, cradling a baby doll in his/her arm.

A dance leader said the dances are ancient Aztec, but I think that is unlikely. The dances resemble something I've read about the Hopi and I think are basically traditional Native American from cultures Northwest of Mexico City. The tunes, I think, are partially derived from Medieval Spain, passed through centuries of native influence; and perhaps combined with native tradition. Some notes in the tunes definitely reflect the cries of exotic birds or coyotes. The title of one, Pico Perico, or Parrot Beak, has a very specific high sound of a birdcall in it.

Among other specific steps are los Arcos (The Bows), which features at the end of each line of music, a triple clack-clack producing by snapping the wooden clackers on the bow-strings, with the motion of shooting an arrow.

In La Columbiana, the pattern of the dance is done entirely on one foot until the end of the musical line (about 8 beats), when the dancer comes down on both feet then changes active foot.

La Cruz brings the dancers into crossed lines in the shape of a Cross, in many variations.

Columpio (I think!) has an unusual step; first man in the line links right knee around first man in the other line, bounces all the way around the other in a circle hopping on the other foot, then hopping back with left knees linked, and dirctly to the next in the line so that two pairs hop around each other, and on until everyone is involved in pairs, then winding through to the last ones in each line. No little kids tagging on this one - very energetic!

El Adios, always the last offering, is a lovely dance. It is addressed specifically to The Virgin of Guadalupe. After some other figures, the men begin to remove their finery. The first pair dance up to the altar of the virgin and lay their headdress down; they then dance backwards to the second pair, do a little in-and-out figure there, always facing the Lady, and accompany the second pair up, who lay their headdresses down next to those of the first pair; repeated with each couple, and then all repeated again for the decorated aprons and at last for the bows and rattles; when the last couple have danced back to place, all kneel to the Lady and the series of dances is over. 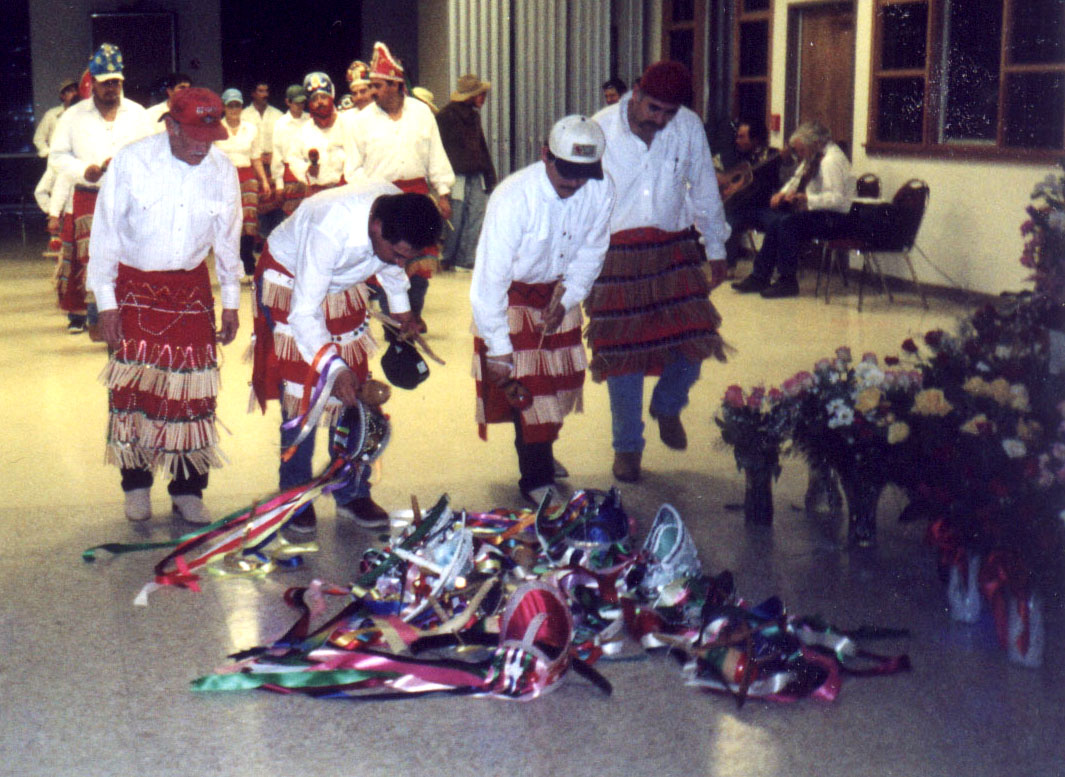 The total presentation by the adults usually lasts two or three hours. Some children are learning to continue the tradition.

If you wish to be notified of the dance schedule for the coming season, email me at truprice@wvi.com sometime in Nov. or early Dec., and I'll send you what I know of the schedule. Performances will almost certainly include Independence on Dec. 12; usually there are other performances as well, often Salem or Corvallis, and we have travelled as far as Forest Grove.

back to Truman Price music page